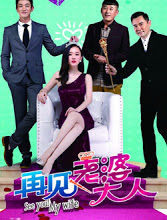 Zhao Tiancai and his wife Zhen Meiren divorced hastily because of a trivial matter. Zhao Tiancai became an older divorced man along with their boss Huang Songning and colleague Long Xiaopei. Huang Songyu was caught by his ex-wife and divorced because of an extramarital affair; Long Xiaopei's marriage to the rich second generation was purely unreliable, and belonged to the flash marriage and divorce family. After the divorce, because of children, life, work, and career, Zhao Tiancai and his ex-wife always had entanglements and entanglements. During the restoration of "freedom", Zhao Tiancai met Hua Bi Ting from the university and had several encounters. Bi Ting had a good feeling for Zhao Tiancai . After meeting her middle school classmate Liu Jin, Zhen Meiren's life has become more prosperous. She has repeatedly met and dated with successful men, but Liu Jin has managed to sabotage them. Eventually, the three divorced men finally found their way in love and life.