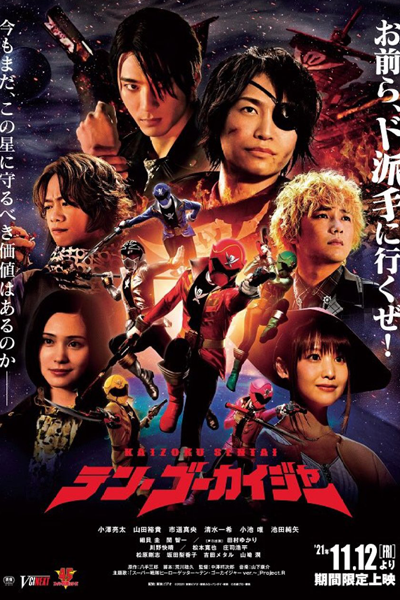 The 35th Super Sentai is an unbelievable team that uses the powers of previous teams to fight. They are the Kaizoku Sentai Gokaiger. Though they came to Earth seeking the “greatest treasure in the universe”, they protected the planet from the invading Space Empire Zangyack and came to believe that the Earth was worth protecting. Ten years have passed since then. The public gambling activity “Super Sentai Derby Colosseum” has been established on Earth and has been hugely popular across every generation. Though the many Super Sentai heroes had been the targets of bets, they cooperate with the Colosseum project so long as the money is used for defending the Earth. However, one Super Sentai could not be contacted. That team had disbanded and each member gone on their separate paths. It was during this time that Captain Marvelous appeared on Earth, issuing a challenge to the Colosseum’s administration. But standing opposite from Marvelous is Gai Ikari whose views match those of the Colosseum’s. Is it the Gokaigers or the people of Earth that are changed from this passage of time? How will Joe, Luka, Doc, and Ahim respond to these circumstances? After ten years, an extraordinary battle is about to begin…!